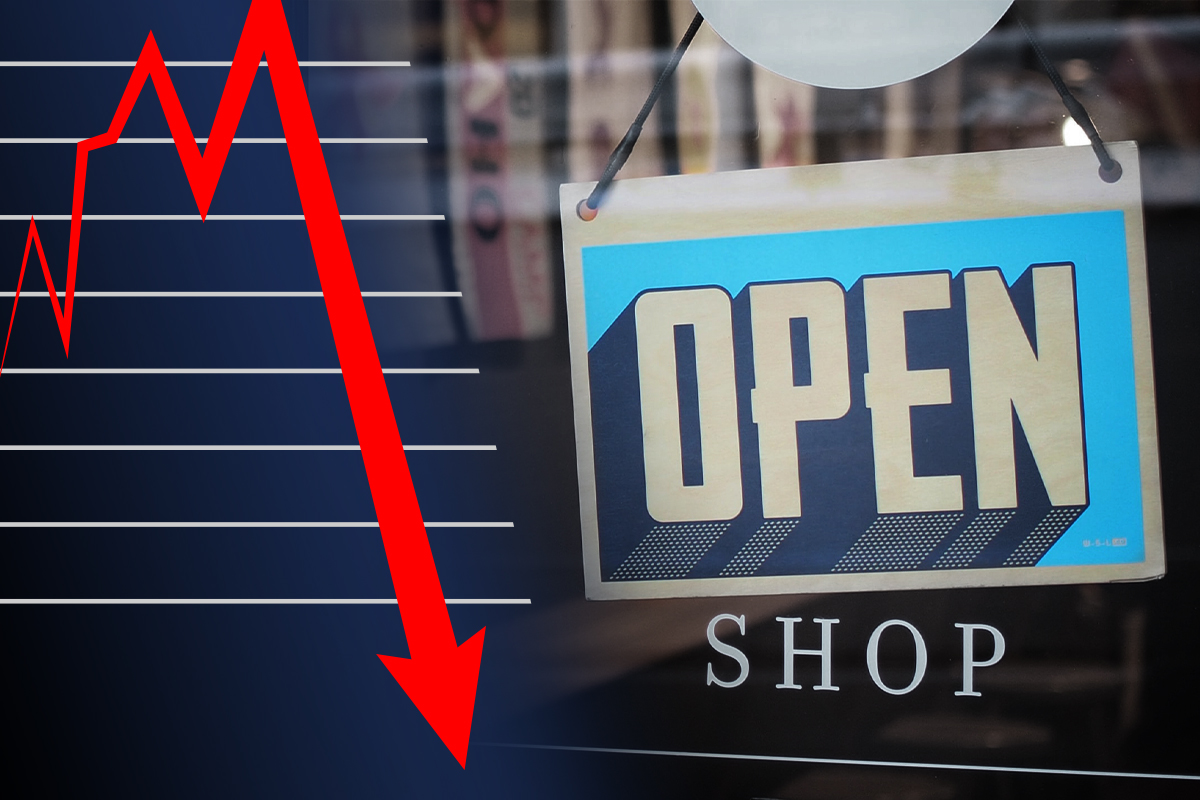 Small business Covid impacts have been huge. Read on for a proposition to help counter these effects.

Why is our legislature largely dismissing tax policies targeted at keeping small businesses afloat? I’ll reserve my opinion on that and focus on the important stuff (earth to Americans, now is time to focus on important things, not the 24/7 partisan bologna).

Proposition: How small business Covid effects should be better dealt with…

The details of the stimulus package, regardless of partisan contention, are entirely irrelevant to the fact that the basis of this package is mediocre economics. Small business Covid concerns are huge. At its very core this package is aimed only at minimally addressing some symptoms of the shut-down without sufficient effort to slow the bleeding and does so by leveraging a tool incapable of contributing to GDP, more expensive to businesses, and if too expansive, capable of long term damages. Don’t get me wrong, I appreciate the size of this enormous stimulus bill but expecting shut-down businesses to take on loans to retain employees during a period of zero revenue is naive. Conversely, a payroll tax cut would be appropriate during this period and would be an effective catalyst for survival. Critiques of this policy have been largely focused on income inequality, which frankly isn’t relevant; not paying tax on money owned does not equate to giving money to anyone, let alone the rich. These same critiques offer no suggested amendment or alternative, likely because their goal is not to effect a solution but rather to support “free money” initiatives. One such alternative to consider would be to limit cuts to employer-responsible payroll taxes. 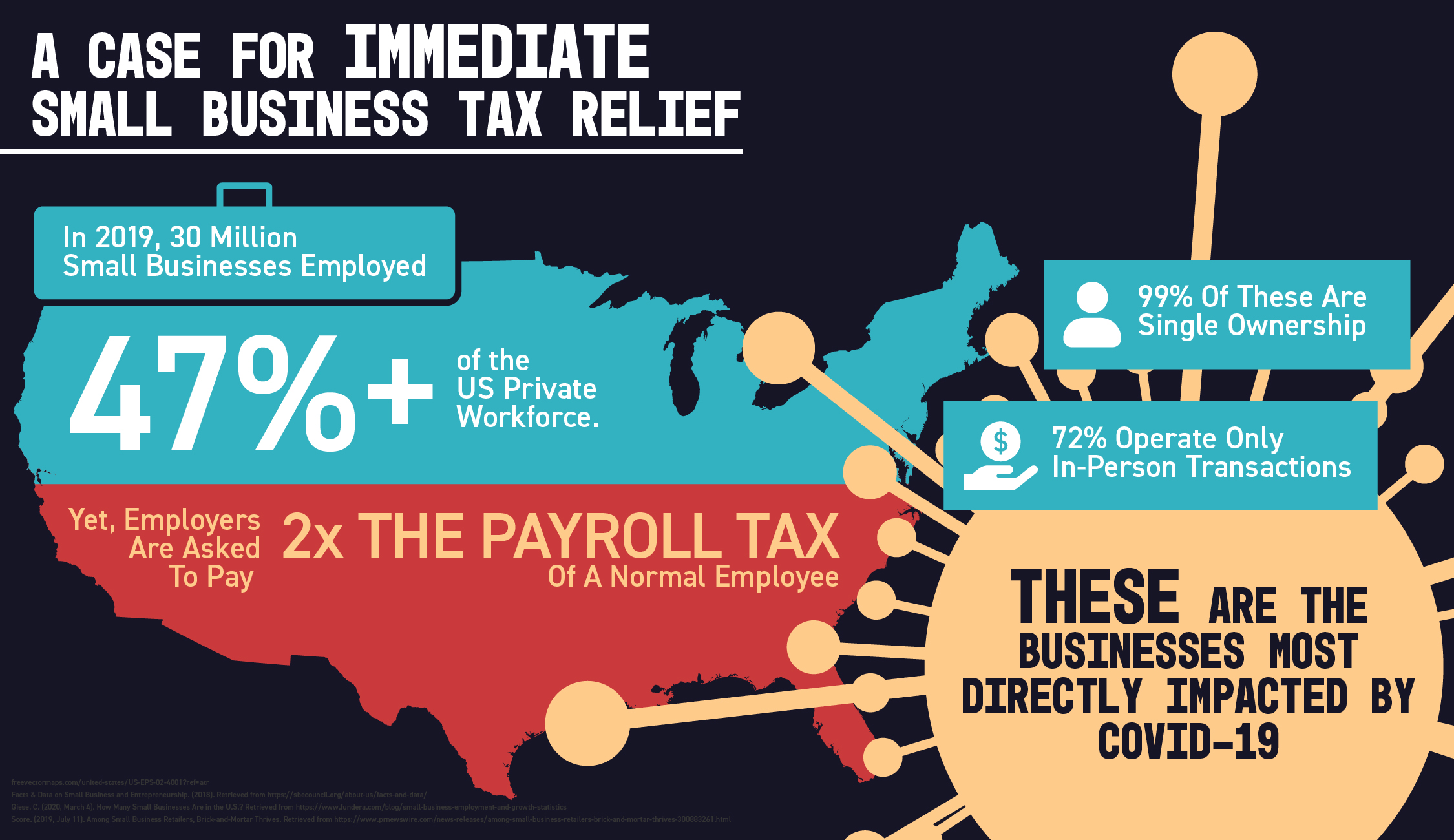 In 2019 more than 30 million small businesses employed nearly 50% of the US’s private workforce (estimates ~47%+). Of these small businesses, over 99% are single ownership and 72% operate entirely in-person transactions with no online alternative. These very businesses are those which are most directly impacted through this sweeping shut-down. In spite of massive layoffs, the majority of these businesses and the workforce they employ remain standing and are holding on by the skin of their teeth. So, what we we doing to help them hold up the dam?

Surely we can agree that these closings are in the public’s best interest and owners’ willingness to do so should be met with an equal response. Encouraging these businesses to take on debt, with interest, as a supposed stimulus is hardly an equal response but it’s a start. Unfortunately, the stimulus packages being discussed are largely that of “free money” initiatives, most of which are not going to these companies.

As you can see by the statistics above and as is evident in the current economic crisis, these businesses are not edge cases. However, when policies are discussed, these tens of millions of owners and half the US workforce are treated as expendable outliers in a crusade against a fractional exponent demographic of vilified corporate C-level executives. With the small volume and high profile of these bad actors, targeting them directly with policy addendums should be an extremely easy task. The tireless derision of articles written by hacks in the news media have been quickly adopted by partisan opposition against all of these people through selective-spin analytics, lacking all semblance of reason and economic fundamentals. It’s a curious case of pundit dementia that there should be so much animus towards a policy enacted by both Presidents Georgie W Bush and Barack Obama. While their cuts were only about 33% (not Trump’s 100%), it would be fair to suggest this current situation easily justifies a greater percentage.

These business owners are people who’ve taken on the responsibility of employing nearly half of this country. Most of these people do so without a salary, many taking on mountains of debt to make sure they keep their people employed. As thanks for that, these same people are asked to pay twice the payroll tax as a gainfully employed person, plus half of the payroll tax for every person they employ, plus unemployment insurance for all of those same employees to benefit from, and all while not being eligible for unemployment benefits themselves. Re-read that; if it doesn’t sound insane to you, you’re probably part of the problem.

Instead of supporting these people who prop up nearly half of this economy without any safety net, we tax them on zero revenue and redistribute those taxes in benefits they are not able to take advantage of. We took direct action against them by shutting their businesses down, at no fault of their own and without much resistance, and instead of compensating them for this, we propose increases to the benefits they’re unable to leverage all while continuing to tax them more than anyone else. While some plans have suggested a UBI, which at least evens the playing field, eligibility cases for economic relief based on 2018 income statements would mostly benefit the presently gainfully employed. In the 2018 bull-market, many of the business owners, who presently earn $0 while paying their employees’ salaries, reported income in excess of the proposed eligibility threshold. Meanwhile, an estimated 42% of the country’s workers would be found eligible and would receive checks. So, what’s wrong with that? As of writing this article, most peak COVID layoff predictions don’t even make up for half of that eligible percentage. If you’re asking yourself if that means we’re paying mostly people who are gainfully employed while kicking our small businesses and their owners in the gut, you’d be correct. That’s flat out stupid.

It would seem far more effective for the government to empower the large volume of business owners attempting to battle this situation while we still can, than to essentially facilitate their failure and attempt to pick up the pieces. After all, these are businesses capable of pivoting towards production. By supporting that breadth of production, we create greater means of growth and easier access to income. Just as a tree branches-off for greater and greener foliage, our economy benefits from the survival and growth of our small businesses. Direct government-to-people funding, however, simply rotates cash-flow and while it is undoubtedly necessary, it must be the secondary policy, not the primary one. In a shut-down economy where these businesses receive NO REVENUE, what kind of insanity is it to charge them payroll taxes which are ONLY due as a result of their employing people? It seems to me that’s a policy that encourages lay-offs and this becomes increasingly apparent when discussing the beneficiaries of “free money” initiatives discussed above.

Tax dollars, as they pertain to everyday life (ie. income, sales, property) are paid from assets or dollars which already belong to those who are paying them. In spite of the media’s portrayal, forgoing that tax isn’t the same as “free money”, it’s theirs to begin with. Where it becomes strange and unusual is when we’re taxing people not on the basis of assets or income but on their hiring someone onto a salaried position. This should be considered a good thing. When these payroll taxes become a hindrance, they effectively contradict themselves. After all, this money does not exist at all if a company lays off its employees, so insisting they remain (or even increase), thereby allowing it to drain small businesses, is completely pointless and self-defeating. The whole purpose of social services is for the healthy workforce to distribute a percentage of its production value to those who cannot work themselves. That’s what these payroll taxes support. If supporting the helpless renders the helpful unemployed (and thereby helpless), this is also a pointless and self-defeating logic that’s seen in every case of natural logic imaginable. This is the same reason why adults are encouraged to strap on their oxygen masks before their children in the event of a plane emergency.

As unpopular as it may sound, it makes no sense to insist upon supporting payroll taxes for employers (not employees) if a business cannot afford to. Yes, I get that cutting potentially 9 months of employer-responsible payroll taxes basically cuts 5 months of funding for these programs but let’s face it, they’ve been funded at a deficit and under-returning for years anyway. The alternative is sacrificing the group in the long term to benefit the unproductive in the short term. It’s not exactly a lot to ask for us to implement payroll tax forgiveness for businesses, we keep talking about loan forgiveness and free money initiatives like UBI, unemployment, and medicare. We’re talking about people who have the unique skillset of turning a profit. Although it’s nice that there is some talk of business loan forgiveness in the event of retaining staff through June, there’s no guarantee you’ll get that, so paying full-staff strictly on debt in the hopes of forgiveness is a hugely risky decision. These are people who can fend for themselves, they don’t want hand-outs, they need their restraints removed. When the enemy breaches your gates, it’s not time to throw meat to the hounds, it’s time to release them.

Exclude big business, cut payroll taxes for employers, and leave it up to us to figure out the rest. Small business Covid impacts need to be addressed.

[p.s.] More to come on small business Covid impact; footnotes being included as we speak… 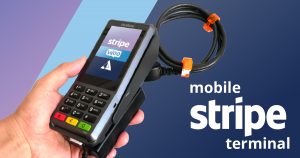 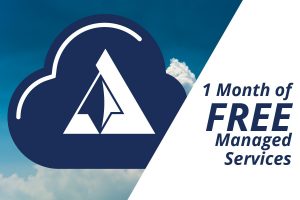